Why is housing in DC so expensive, and how can we improve the situation? 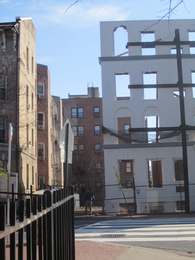 DC is not alone. High housing costs in most cities in the U.S. -- and in many other countries -- have become the new normal. Why are we experiencing this phenomenon? High housing costs are created by a combination of factors, including:

Market forces are the driving force in the cost of housing, with the laws of supply and demand creating the lack of affordability. More people need housing than the number of units, at least in the places most people want to live. Some DC elected officials are championing an increase in DC's population to one million residents, and the actual number of people moving to the District has increased DC's population to the highest levels since 1975. One strategy to address this problem is to build as much housing as possible, so more units are available.  This places increasing pressure on DC neighborhoods and infrastructure to accept much higher density. Elected officials like the idea of more residents and buildings because they increase city revenues from income, property, and sales taxes.

Another strategy to the escalating price problem is to partially remove housing units from the free market by limiting the sale/resale price or rents of some affordable units. This can be accomplished through limited equity cooperatives and community land trusts that own land and housing and restrict their resale value. Housing in these types of ownership structures can only be resold at prices that remain affordable to the next person or family with a similar income. See this discussion of affordable housing models for more detail and other models that reshape the housing market. Similarly, caps on rents based on residents' incomes, inflation increases, or other measures can help keep rental housing affordable over the long term. What role should public subsidies play in establishing requirements for the long-term affordability of units receiving funds? How long should the affordability requirements last?

The size of U.S. homes has increased significantly in the last 75 years as the practical 3-bedroom, 1-bath homes common in city centers and the 1950s suburbs lost their appeal to the McMansions of the 1980s and beyond, with larger and more bedrooms, more bathrooms, new family rooms, big kitchens and foyers, and new amenities. These changes also increased the cost of housing.

Counter trends such as tiny houses have resulted, and these homes’ owners often play a role in building their own homes, with the goal of not having a (large) mortgage or housing payment, and freeing themselves and their families from the grind of working long hours just to make loan payments and allowing them to pursue their own interests. Tiny homes have been proposed and tested in DC.

A more common approach in DC is to create multifamily housing units -- condos, coops, and rental units -- that are smaller in size to make them more affordable. There have also been experiments to create tiny multifamily units with shared features in common areas, such as the single room occupancy (SRO) model that sometimes features shared kitchens, laundry rooms, and even bathrooms in some buildings, to reduce the cost of individual units. Creating affordable units for larger families is also possible and must be a priority.

Construction costs, including materials and labor, continue to increase. Prefab housing can be built in modules in a climate controlled environment and shipped to sites already prepped with foundations/basements, utility connections, etc. The shipped modules are then fitted together, finished, and connected to the onsite features. These units are often less expensive than units built onsite, but this option doesn’t work for many locations and types of homes, and it rarely works for renovating existing buildings, which are more common in DC.

3D-printed housing is also coming of age. Like 3D printing of smaller objects, entire buildings can be designed and built using computer-driven equipment. According to one pioneer of this technology, “With 3D-printing, you not only have a continuous thermal envelope, high thermal mass, and near zero-waste, but you also have speed, a much broader design palette, next-level resiliency, and the possibility of a quantum leap in affordability. This isn’t 10 percent better, it’s 10 times better.”

Utility costs also make housing less affordable to many people, so improving the energy efficiency of buildings, appliances, and fixtures, and including renewable energy -- solar panels for most buildings -- can reduce or eliminate most energy costs. For new homes designed to be highly efficient (net zero or passive house buildings, etc.), the initial cost can be the same as homes built using traditional technology. Planning and design driven by energy efficiency and renewable energy are the key to successful construction or renovation projects.

Transportation costs are a factor facing many households overwhelmed by high housing costs. Moving further away from attractive areas may help reduce the monthly housing costs, but transportation costs often rise due to higher gas consumption. There may also be more limited public transportation options and reduced access to employment. In DC, residents move to neighborhoods further from Metro stations with less frequent bus service and fewer businesses, including grocery stores. Many people have been forced to leave the city to more affordable suburbs.

Financing can also place undue burdens on and restrict housing options for some residents. The government and bank redlining of neighborhoods and communities inhabited by African American, Latinx, Native American, and other ethnic groups in the 1930s and beyond has been replaced by higher loan rates for these same groups today. Better enforcement of existing fair lending laws could improve the situation, as could additional public financing of housing if the private sector is unable to fill the public need for affordable housing. A DC public bank may expand options to finance additional affordable housing than existing public and private financing mechanisms.

Stagnant earnings of most Americans since about 1980 prevent many people from being able to afford adequate housing. Our economy is increasingly passing along economic gains to the top 10%, even more to the top 1%, and the most concentrated benefits to the top 0.1%. It’s not surprising that in this environment, more and more people can’t afford housing. We need to reverse this trend and make significant changes to the distribution of our nation’s wealth and income so everyone has adequate housing, food, health care, transportation, education, and other basic necessities. For affordable housing this is particularly important, because higher personal incomes reduce the amount of public subsidies required as people can afford to pay increased housing expenses with higher incomes.

These factors may seem daunting, but by addressing them, we can help advance the conversation and create more affordable housing for DC residents, which also benefits local businesses, nonprofit institutions, and other stakeholders.  A DC public bank can help play an important role in increasing our options.