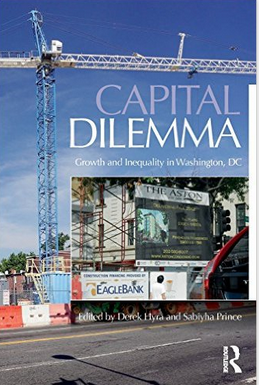 On February 25, 2016 American University hosted a stimulating panel discussion on a new book Capital Dilemma: Inequality and Growth in Washington, DC, edited by Derek Hyra and Sabiyha Prince. The book chapters focus on issues of inequality and growth, particularly on ongoing gentrification making affordable housing unavailable to a majority of our residents who remain, as well as pushing out many who have lived here all their lives. There is much valuable information to digest touching on culture, institutional racism and white supremacy.

Two panelists who are leaders of organizing efforts on the cutting edge of resistance to gentrification and displacement, Parisa Norouzi (Empower DC) and Dominic Moulden (One DC) made insightful critiques of the book. They emphasized that only grassroots organizing and innovative solutions like community land trusts could curb runaway gentrification and the vanishing of affordable housing for low to middle income residents.

David Schwartzman of the DC Public Banking Center made the first comment from the audience. He pointed out an aspect absent in the book, an analysis of the prime driver of the trends discussed, the transformation of local political economy and the players behind this trend. He spoke to the history of the implementation of urban structural adjustment policies, starting shortly before the Control Board dictatorship over DC budget, with its CFO, Tony Williams, former Mayor and now the CEO of the Federal City Council. This non-governmental organization has set the agenda for our local elected government since the 1990s on behalf of the big corporate sector. Gentrification, tax policy favoring the wealthy, privatization, and erosion of democracy are the result, not only in DC but around the world as big capital imposes its heavy weight, the brutal face of neoliberal capitalist economics. It is no accident that DC has the highest income inequality compared to the 50 states in the U.S., and shockingly high child poverty. Replacing the Federal City Council and Wall Street hegemony over DC policies and replacing it with people power, such with an autonomous DC Public Bank serving our community is the way forward.

Capital Dilemma: Growth and Inequality in Washington, DC uncovers and explains the dynamics that have influenced the contemporary economic advancement of Washington, DC. This volume’s unique interdisciplinary approach using historical, sociological, anthropological, economic, geographic, political, and linguistic theories and approaches, captures the comprehensive factors related to changes taking place in one of the world’s most important cities.

Capital Dilemma clarifies how preexisting urban social hierarchies, established mainly along race and class lines but also along national and local interests, are linked with the city’s contemporary inequitable growth. While accounting for historic disparities, this book reveals how more recent federal and city political decisions and circumstances shape contemporary neighborhood gentrification patterns, highlighting the layered complexities of the modern national capital and connecting these considerations to Washington, DC’s past as well as to more recent policy choices.

As we enter a period where advanced service sector cities prosper, Washington, DC’s changing landscape illustrates important processes and outcomes critical to other US cities and national capitals throughout the world. The Capital Dilemma for DC, and other major cities, is how to produce sustainable equitable economic growth. This volume expands our understanding of the contradictions, challenges and opportunities associated with contemporary urban development.