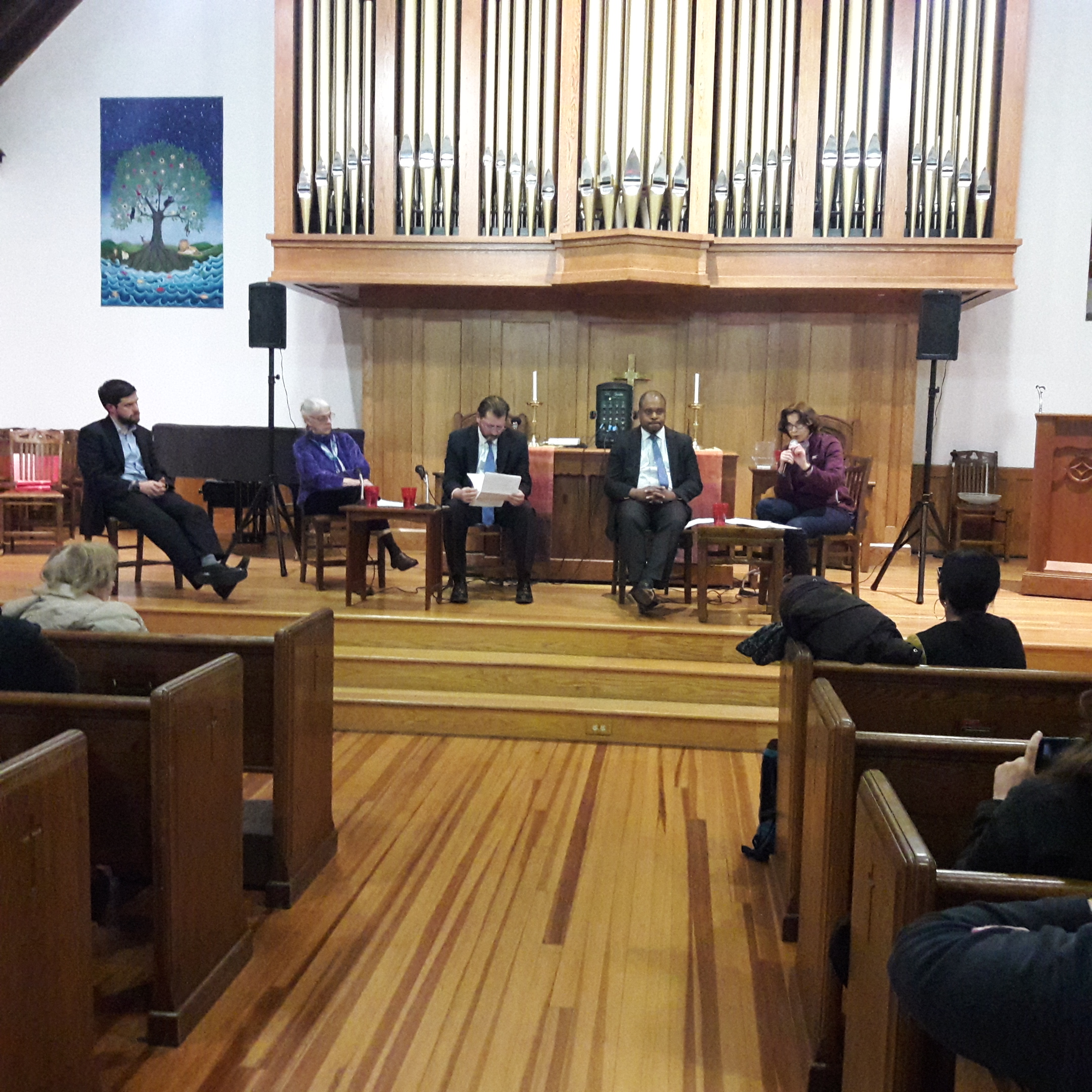 On March 15, 2018, the Cleveland Park Citizens Association hosted a public forum Banking for the Public Interest -- Not Private Profit. The presenters explored proposals for public financial institutions being explored by the DC Council, the green finance authority or "green bank" and the public bank. The five presenters include the following:

Zach Weinstein gave a presentation detailing a series of illegal or ethically questionable activities by Wells Fargo from discriminatory lending against African American and Latinx homebuyers in Sacramento, Philadelphia, and other cities, plus the nation-wide scandal involving new accounts being opened fraudulently without permission of existing Wells Fargo customers. DC Reinvest is asking DC Council to divest its deposits from Wells Fargo and move its accounts to local banks, a public bank, or other banks without similar criminal histories.

Ruth Caplan described how a public bank could eventually accept up to $2 billion in deposits from DC government, not residents or businesses, and leverage these deposits for lending programs to boost the DC economy -- for a sustainable environment, affordable housing, small businesses, and local nonprofit infrastructure. She described Germany's diverse public banks, which comprise 65-70% of Germany's total banking sector. She also described the model of the Bank of North Dakota -- nearly 100 years old -- which makes participation loans through community banks around North Dakota and has successfully supported the community banking sector, which is more robust and resistant to economic downturns. Its programs include agriculture, small business, local infrastructure, and student loans. The DC public bank is supported by many different organizations, including ONE DC, Green Neighbors, Green America, and more. Other cities and states are also considering public banks, from New Jersey, California, and Pennsylvania, to San Francisco, Seattle, Philadelphia, and more. In the District, the Dept. of Insurance, Securities, and Banking has issued a Request for Proposals, which is under review. After it is completed, the DC Council would consider a bill to fund a business plan and a charter to establish a public bank.

David Grosso gave his personal investigation of Wells Fargo's discriminatory lending practices in the city after it was brought to his attention by Manna. Grosso met with the Chief Financial Officer (CFO) and Treasurer to discuss the possibility of the District divesting city funds from Wells Fargo. Unfortunately, the Office of the CFO (OCFO) decided it was not possible to divest from Wells Fargo at that time. Subsequent criminal and unethical actions by Wells Fargo continued. Grosso continued to describe his vision for equity that will strengthen low-income households and local small businesses, including minimum wage increases, universal basic income, and eventually a public bank that would also have a mission to serve these residents and businesses.

Amir Kirkwood described the green finance authority's mission to combine public and private sector dollars to invest in a range of environmentally sustainable projects that could benefit. He described a working group established by DC Council to explore their efforts to move the concept of the green finance authority forward, and how it might better function, including governance, funding streams, avoiding undue political influence, and other matters.

Mary Cheh described the Green Finance Authority Establishment Act, which may be ready for markup in the DC Council's Transportation and the Environment Committee, which she chairs.  Traditional banks can often not finance environmental projects, and government agencies are also limited in how they can invest. An independent authority such as the Green Finance Authority could establish revolving loan funds and other finance mechanisms that would increase available funding for these types of projects. The existing bill has limited funding, only $7 million/year for five years, and the green finance authority would need significant new investment in future years. Cheh also described some of the obstacles facing the bill and how some issues might be resolved.

The full audio recording of the session, including public questions and answers is available for streaming.